Methamphetamine or Meth can impact the lives of addicts beyond repair in most cases. Meth addiction is one of the most alarming situations that the world is facing. Recent sources indicate that 1.6 million people reported using meth in 2017. The situation is bad around the world and specifically in the United States. Indiana seems the most affected by meth addiction as many regions in the state suffer from meth addiction. The numbers are alarming and things could get out of control if we do not pay attention to it soon enough. Additionally, the same source reveals that 0.3% of the population admits using meth in the past month.

Another source reveals that the average meth user was 23.3 years old back in 2016 and experts suggest that the number could be much lower in the current situation. Further studies by Monitoring the Future show that 0.5% of the 8th, 10th, and 12th graders have tried meth at least once. The TEDs data presented an alarming situation where the nationwide treatment admission for meth dropped down from 68% to 49%. Although the detox center is trying its level best to deal with these addicts; the situation seems to be getting out of hand for now. 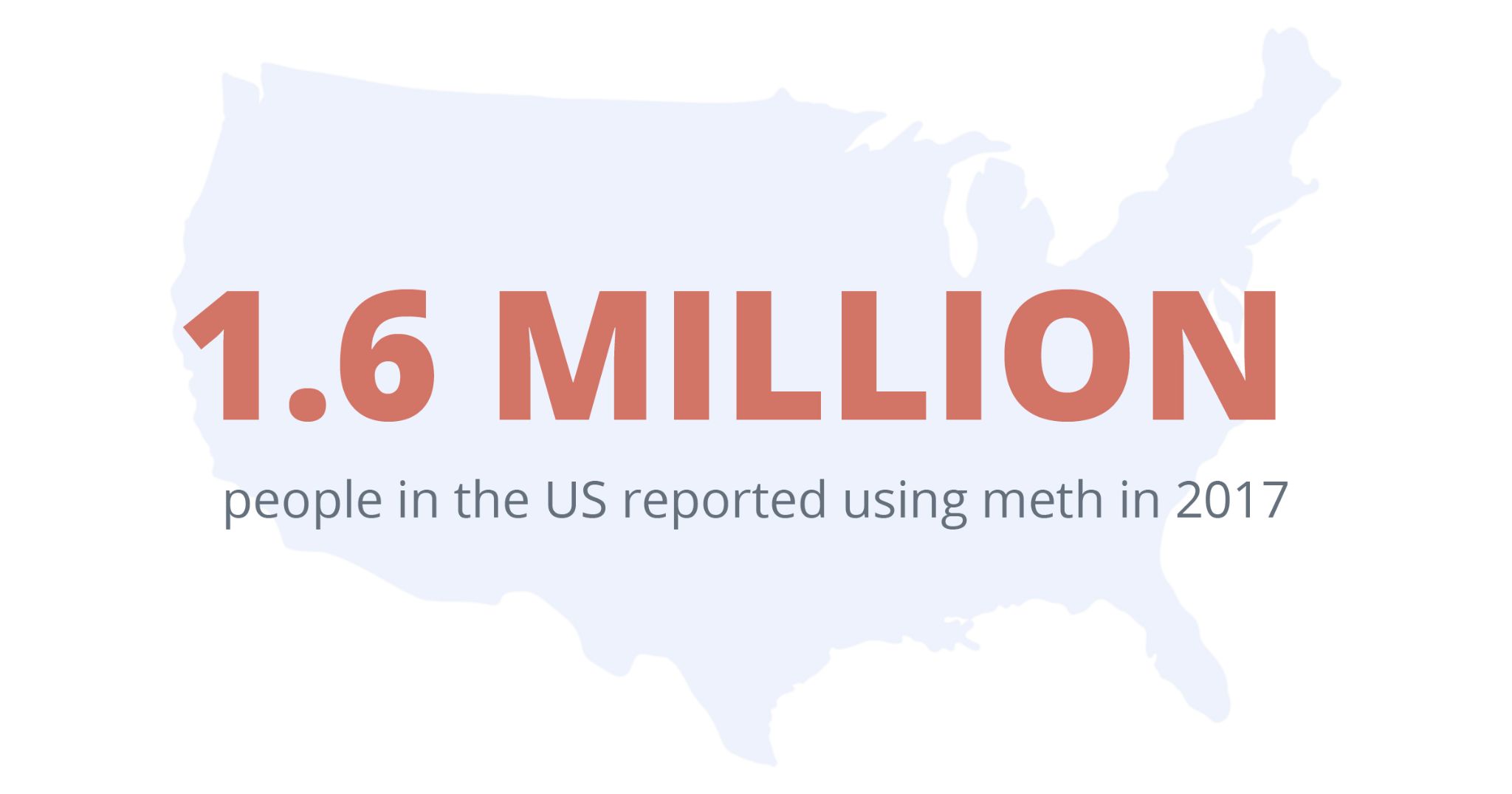 Following are the symptoms of meth usage

All of these symptoms not only make their lives harder but also makes it difficult for them to distinguish between their reality and their symptoms. One of the biggest reasons why meth addicts have such a high number is there are various ways that people misuse meth.

How Do People Misuse Meth?

You may see people consuming Methamphetamine in various ways depending on various factors. You can choose to smoke, snort, inject or intake meth through your mouth. However, different people have different kinds of preferences for the kind of method they want to use. This method has evolved over the years and certain methods are more popular in one region as compared to the other.

Meth users continue to use meth until it starts interfering in their lives and that is when the troubles begin. People who experience symptoms or have seen someone deal with the initial withdrawal symptoms know how difficult it gets to manage things. People try and get over their addiction by themselves but it is already too much to bear by then. They have no other options but to look up to a detox center to help them deal with their addiction.  The question is: do the different methods of using meth have a different impact on the body? Let’s find out.

Comparing the Meth Use Methods

Injecting or smoking meth are the most common methods. The substance reaches the bloodstream fastest through these two methods causing a sensation of high in the body. The rush most addicts feel lasts for only a few minutes, but it is highly pleasurable which is why people continue to use meth.

Contrary to this, snorting or ingesting meth causes euphoria, a state of high. The basic difference between these methods is how fast the body starts taking effect of the drug. Someone who snorts or injects meth tends to feel its effects in 3-5 minutes while using meth orally takes around 15-20 minutes according to research.

When Does It Become A Problem?

Most people start to misuse meth by the binge and crash method. The problem is that the pleasurable meth effects last only for a few minutes and disappear soon after the meth content in the blood starts to tone down. People try and get the same feeling of euphoria by taking more meth especially foregoing to sleep and having food which we call a run. Although meth is structurally similar to amphetamine and to a neurotransmitter called dopamine which triggers reward and pleasure sections in the brain. However, it is still quite different from cocaine and other stimulants.

How Does Treatment Help?

The medicines are not ideal for people looking for methods to fight against symptoms but also those who want to maintain long-term sobriety with their addiction. There are various treatment center options for anyone willing to take the first step. There are plenty of medicines available that can help with methamphetamine withdrawal. However, the user must take these medicines after medical advice from professional detox experts.

Following are some of the most popular kinds of withdrawal symptom medications that health experts use against meth addiction.

It is a narcolepsy medicine that helps against meth addiction. It also helps fight against several other symptoms like memory loss, and mental processing. The American Journal of Drug and Alcohol Abuse claims that modafinil can help with meth addiction when given in combination with therapies.

Bupropion also called Wellbutrin is another important drug that helps fight against meth addiction. The drug serves as an antidepressant for people who have stopped smoking recently. The treatment facilities in Indiana and its corresponding areas tend to use this drug to help addicts deal with their symptoms.

Additionally, people who use meth for long periods not only suffer from depression and anxiety but also tend to suffer from a lack of dopamine production. Bupropion helps with this condition by inducing dopamine inside the brain and helping the sufferer come back to normal life. However, it is still important to use these medicines only after medical supervision.

Fluoxetine is another popular withdrawal symptom control drug that helps fight against anxiety. There are multiple trials with mice where the drug is helpful. We believe that the drug could prove to be helpful for similar cases shortly.

It is important to know that the detox period differs from person to person depending on the severity of their conditions. Therefore, it is important to understand the meth withdrawal timeline for a better reference.

The time required for full withdrawal differs from person to person since different people may need different solutions for their problems. The National Institute On Drug Abuse has done some tremendous work in the field which focuses on the timeline for the withdrawal process. People suffering from withdrawal issues tend to follow the following timeline:

Withdrawal symptoms may start appearing in the first 14-48 hours for people who use crystal meth; we call this phase crash where the body first starts experiencing the symptoms for this. Withdrawers start experiencing various symptoms such as sweating, abdominal pain, cramping a d sleep disturbance. The physical symptoms can continue to worsen over the next few days.

This is the period where the withdrawal symptoms start peaking for these former users. Addicts tend to feel extreme anxiety, depression, fatigue which makes things worse. Users also complain about feeling extreme drug cravings and lingering muscle pain all over the body. It is perhaps the most common stage where people go for relapse without a detox center.

Drug addicts may start to feel control over other symptoms during this period. However, the craving for drugs may continue for several weeks afterward. The drug addicts may also experience fatigue and depression during this time.

Withdrawal symptoms tend to get worse after giving up drugs for a month. While the physical symptoms may fade by this point, there is still a chance of experiencing depression, anxiety, and fatigue which may persist for several months after it too.

What To Expect During Meth Detox?

Most meth addicts tend to be reluctant towards getting rehab and detox treatment. However, detox centers like Indiana Center for Recovery, focus on preparing, meth addicts for their treatment. For their assistance, the detox center tends to break down the process into simpler steps so that the user can recover gradually.

You may find professionals assessing physical symptoms that meth users have and make an evaluation of their current health status. The assessment helps determine what you can use to minimize the problem. The doctors may start discussing the rest of the treatment steps with the client once they complete the first step. We usually break these steps into the following portions.

The first step for detox is the evaluation where health experts like doctor’s start by assessing the current status of the addict. This includes taking urine screens and testing the severity of the addiction to determine potential side effects. The professionals tend to probe about their past drug use and other related questions to make a better guess of how addicted the person is. Gathering the history of the patients also helps the doctors determine co-occurring symptoms because it will affect the kind of treatment an individual may get.

The meth detox process involves stabilizing the patient against their withdrawal symptoms. Once the addicts complete their detox process, it becomes easier for them to deal with the rest of the addictive symptoms. The experts may also ask the drug addicts to continue their treatment in a rehabilitation center for constant monitoring and a faster response. Additionally, the treatment experts tend to keep the addict’s family updated regarding the treatment process.

The doctors ask the addicts to move to rehab once the basic detox process completes. The rehab is important because it helps maintain the treatment process and save the addict from potential relapse.

Detox is the fastest approach for anyone who wants to give up meth addiction. We know that withdrawal symptoms are highly uncomfortable for people who suffer from substance abuse.  However, going through the detox process makes it easier for the addicts to get over their treatment. The biggest reason why people stay away from meth treatment is that they fear judgment. There is a stigma related to meth users which is why they pretend to be normal. 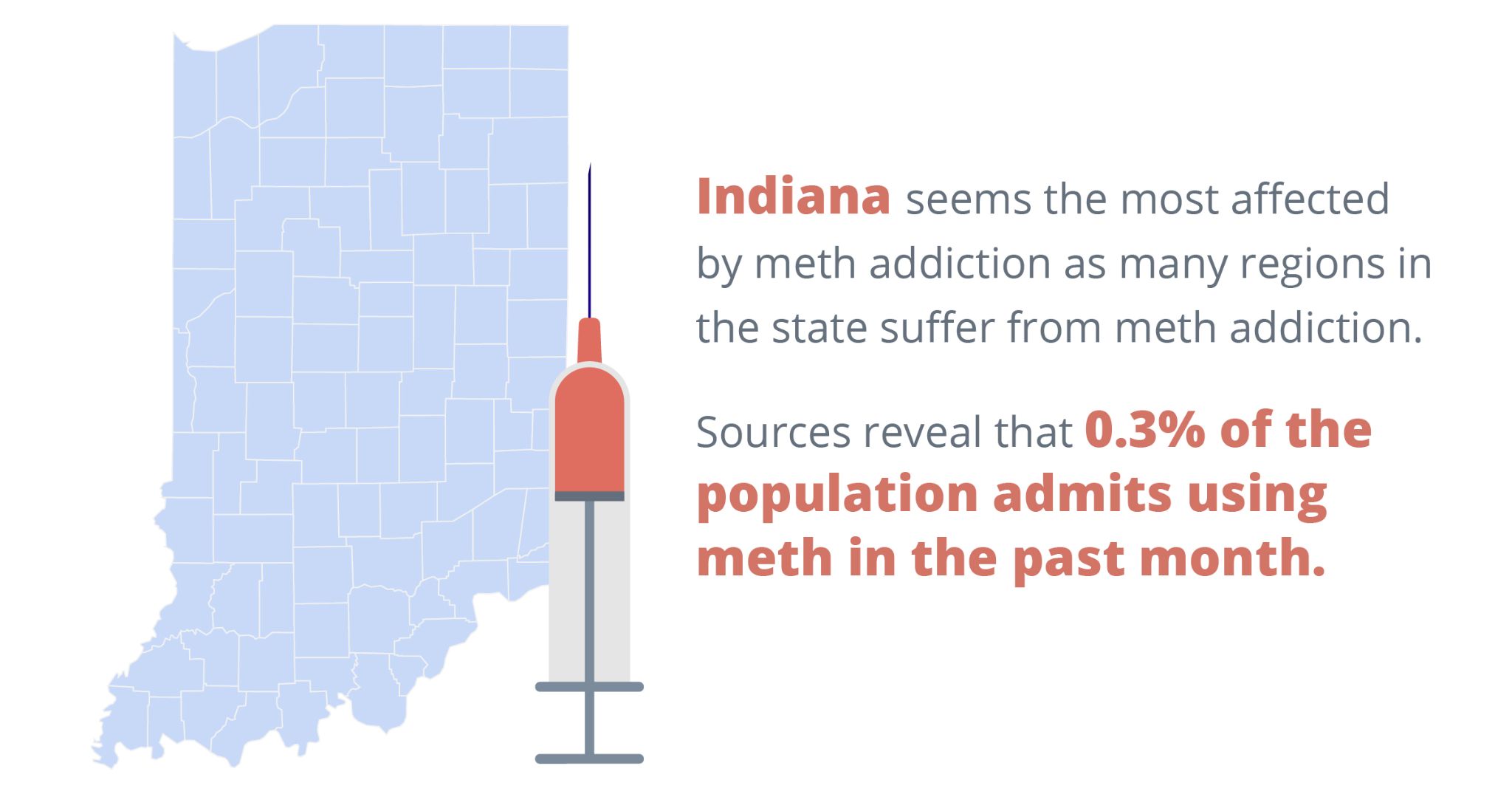 Fortunately, there are tons of options for meth treatment in Indiana. These rehab centers provide full confidentiality to the addicts so that they can come to the rehab center without a problem. Reputable rehab centers like Indiana Center for Recovery focus on bringing effective methods for detox. They understand the individuality of each case which is why they allow users to choose from a wide range of programs for drug detox.

Meth addiction is undoubtedly a serious problem for people all over the world. Fortunately, reaching out for meth detox and treatment is the best way out of it. We know that going through the treatment can be agonizing and it can be difficult to deal with the physical symptoms as well as the mental ones.

However, you can overcome the addiction as the rehab center will help you address all your needs and counsel you psychologically so that you can continue with your life. We hope that you find this guide helpful. Feel free to reach out to us if you have further questions that you need answers to. We would be more than happy to walk with you through your detox journey.