Over the last two decades, there has been an unsettling rise in opioid use in the United States. The fallout from this extensive use has culminated in multiple cases of opioid dependence or opioid use disorder across the country. Circumstances continue to worsen without adequate treatment, shifting individuals suffering from dependence into situations of financial strain and homelessness. Many cases of opioid use disorder also often result in death. Roughly 50,000 Americans died from opioid-involved overdoses in 2019 alone and studies have shown an alarming opioid relapse rate of up to 91%, indicating that the risk for relapse for opiate addiction could be higher than it is for other drug addictions. These staggering numbers only continue to grow every year, signaling a critical need for more significant treatment of the opioid crisis. 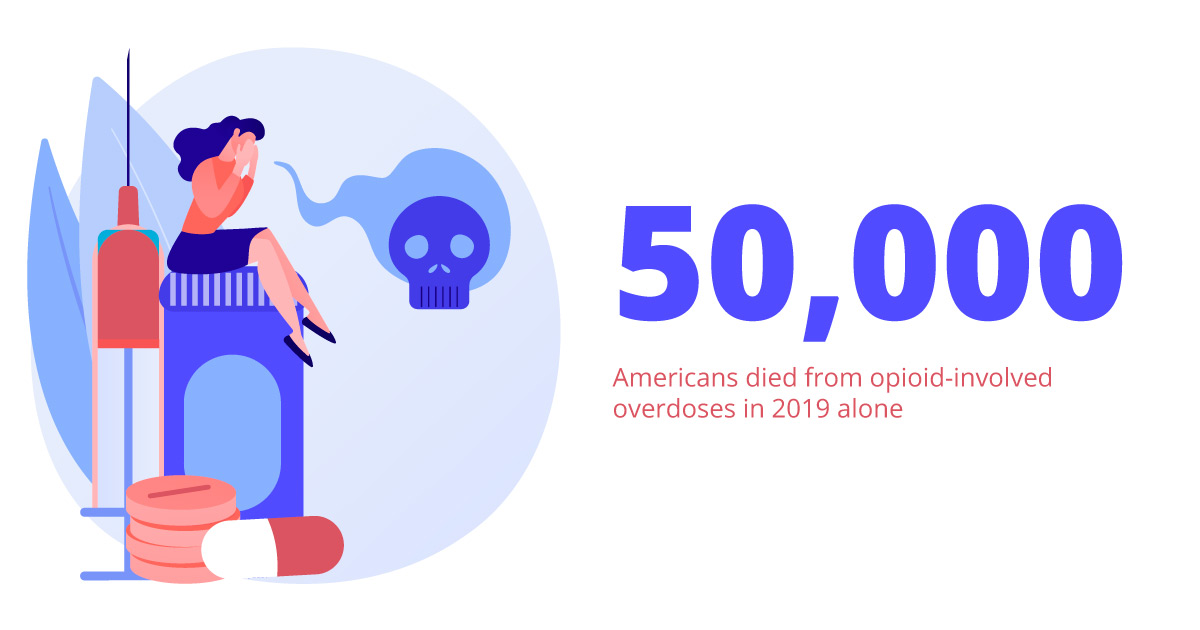 Opioids are classified as chemically related substances that act on opioid receptors in the brain and body to produce pain-relieving and euphoric effects. These substances include prescription painkillers, heroin, and fentanyl, all of which are highly addictive drugs. Once addiction has taken its hold on an individual, it is incredibly difficult for them to stop using. Not only does the brain adapt to the elevated levels of dopamine created by the drug, but the body also becomes dependent on it to function. Halting the use of one of these substances causes uncomfortable and oftentimes dangerous withdrawal symptoms to occur. These distressing side effects are largely what makes it so challenging to quit.

Relapse Doesn’t have to be a Part of Recovery

While relapse is generally considered an element in addiction recovery, it doesn’t have to be. Medically-assisted treatment for opioid use is a frequently implemented approach that is clinically proven to minimize the likelihood of relapse. This type of treatment consists of a combination of behavioral therapy and medication in an effort to treat addiction and sustain recovery. The medications administered most often are opioid receptor agonists and antagonists. These are medications that bind to opioid receptors in the body, essentially blocking the euphoric effects of the drug and reducing instances of use. The application of opioid blocking medications such as Vivitrol offers individuals with opioid use disorder a greater chance at complete abstinence by reducing opioid cravings and preventing relapse.

How Does Vivitrol Work?

Vivitrol is an FDA approved medication that is used for opioid treatment to aid individuals in addiction recovery. It is an extended release formulation of naltrexone that is injected intramuscularly once a month by a healthcare professional. Vivitrol is non-narcotic and has been shown to have little to no potential for addiction. This medication is an effective method for treating opioid addiction because it binds itself to opioid receptors throughout the body so the drug is unable to, consequently blocking any euphoric or addictive effects. This interaction effectively curbs opioid cravings and is a greatly beneficial component in treating addiction and preventing relapse while in recovery.

Alternative medications implemented in the treatment of opioid dependence like buprenorphine/naloxone (Suboxone) and methadone are classified as opioid agonists. These substances work not only by binding to opioid receptors but also by activating them. The interplay between these medications and opioid receptors can trigger the brain’s reward systems, often reiterating a cycle of dependence and misuse. While Vivitrol also binds to these receptors, it does so without activation, ultimately eliminating the risk of dependence. A recent survey of individuals who were going through withdrawal from opioids indicated that patients preferred Vivitrol over medications like buprenorphine or methadone. Furthermore, treatment for dependence with opioid agonists has been found to be less suitable for individuals whose employment may prohibit the use of opioids such as health care workers, military personnel, and the police force. Naltrexone also exists in pill form to be taken orally, requiring that individuals take a daily dosage. This regimen has shown lower efficacy rates due to poor adherence to the medication. It is often difficult for those in recovery to remember to take a pill every day, so the once-monthly injection of Vivitrol is much more beneficial than other methods for opioid treatment. The effects of the medication continue to work over the course of the month, allowing the individual to focus on other aspects of their recovery.

Vivitrol was first approved for opioid treatment in the United States after a double-blind, placebo-controlled drug trial was conducted. This trial was intended to assess the effectiveness of Vivitrol in treating opioid use disorder over the course of six months. The 250 patients involved in this trial were intentionally seeking treatment for opioid dependence. In addition to receiving 380 mg Vivitrol injections every 4 weeks, patients were also engaged in individual drug counseling biweekly. The results of this study showed that 90% of the participants that received Vivitrol treatment had an increased proportion of opioid free weeks, versus 35% of individuals who were given the placebo. Complete abstinence from opioids was also attained by 35.7% of the participants that were given the Vivitrol injection, compared to just 22.6% of individuals who had received the placebo. Following this initial drug trial, clinical setting studies were done to further analyze the efficacy of Vivitrol treatment for sufferers of opioid use disorder. Comparisons were done between oral naltrexone, Vivitrol, and Suboxone. In conclusion, the results of these studies demonstrated that patients who had received the Vivitrol injections were more likely to remain in treatment for longer periods of time, and their likelihood of achieving abstinence was higher than those who were receiving either oral naltrexone or Suboxone treatments.

How Effective is Vivitrol?

Multiple studies conducted afterward have continued to demonstrate the effectiveness of Vivitrol treatment for opioid dependence and prevention of relapse, specifically in certain subpopulations of the United States like jails and prisons where the rate of substance use disorders are high. One of these studies evaluated the efficacy and participant retention of Vivitrol treatment for individuals with opioid use disorder within a western Massachusetts county jail. The purpose of this study was not only to assess Vivitrol’s impact on abstinence but also to investigate whether there was any benefit to beginning treatment for inmates before their release. 67 individuals were examined in this study, with 47 participants receiving their initial Vivitrol injection 7 days before release and 20 receiving it afterward at outpatient treatment centers. Retention rates in the fourth week of treatment were shown to be higher within the group of individuals who initiated Vivitrol treatment pre-release than that of those who started treatment in the community. Out of those 47 participants, 55% remained in treatment versus 25% of the remaining 20 individuals. The study concluded that receiving Vivitrol injections prior to jail release increased the rate of retention in recovery as opposed to those who began Vivitrol treatment after release.

Who is Ideal for Vivitrol?

To begin using Vivitrol for treatment of opioid dependence, the patient must have already completed the detox process. Vivitrol therapy requires that an individual be opioid-free for 7 to 14 days before they receive the initial injection. The presence of opioids in their system when starting Vivitrol treatment will cause them to immediately experience uncomfortable withdrawal symptoms. If a relapse on opioids occurs while receiving Vivitrol injections, including the use of any type of opiate medication, the process begins again and there is a waiting period of one to two weeks before they can continue receiving this therapy. It is imperative that the individual avoids the use of opioids completely while participating in Vivitrol treatment. While the effects of opioids may be blocked by Vivitrol, it does not eliminate the risk of an overdose. This risk is increased when a person attempts to take a larger dose of an opioid drug or substance to counteract the blocking effects of Vivitrol.

Side Effects of Vivitrol

Vivitrol is shown to be a highly tolerable medication in individuals suffering from opioid use disorder, but as is the case with any drug, there are adverse physical reactions associated with Vivitrol treatment. The majority of these side effects are mild, but some can be severe. The more common side effects of Vivitrol can include:

More severe but less common side effects that may occur when using Vivitrol are characterized as serious reactions at the site of injection like severe pain, dark scabbing, a hard lump at the injection site, or swelling that gets progressively worse. Treatment with Vivitrol also has the potential to impact your liver. Liver complications associated with the Vivitrol injection can cause changes in liver function and liver swelling, also known as hepatitis. Pneumonia can also be a serious side effect. It is important that you report any adverse reactions that may occur while undergoing Vivitrol treatment to your physician.

Although taking those first steps in recovery can often feel overwhelming, individuals seeking treatment for opioid dependence are at a substantial advantage when they choose to participate in medically-assisted treatment options that utilize medications such as Vivitrol. Vivitrol for opioid treatment is most effective when it is used in conjunction with other recovery management programs like behavioral therapy, individual or group counseling, and substance abuse education.

Table of Contents hide
1 What Are Opioids?
2 Relapse Doesn’t have to be a Part of Recovery
3 How Does Vivitrol Work?
4 Vivitrol vs Alternatives
5 Vivitrol, the First Approved Opioid Treatment
6 How Effective is Vivitrol?
7 Who is Ideal for Vivitrol?
8 Side Effects of Vivitrol
9 Long-term Recovery is Possible
9.1 Verify Insurance
9.2 About Opioids